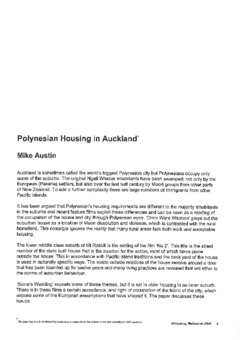 Auckland is sometimes called the world's biggest Polynesian city but Polynesians occupy only some of the suburbs. The original Ngati Whatua inhabitants have been swamped, not only by the European (Pakeha) settlers but also over the last half-century by Maori groups from other parts of New Zealand. To add further complexity there are large numbers of immigrants from other Pacific Islands ....