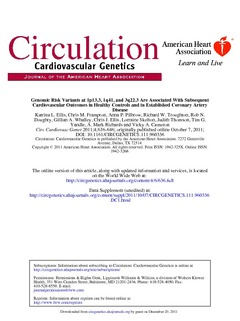 Coronary artery disease (CAD) has multifactorial origins, and although some families are particularly affected, no precise mode of inheritance has been identified. It is likely that this reflects the contribution of numerous genetic components, each conferring a small risk in cumulative interaction with environmental factors to substantively increase disease susceptibility.1 In recent years, significant advances have been made in elucidating the genetic basis of CAD with the completion of several large genome-wide association studies (GWAS) that have looked at the DNA variation across the entire human genome. In a landmark study in 2007, the Wellcome Trust Case Control Consortium identified a region on chromosome 9 (9p21.3) that was the most strongly associated with the risk of developing CAD,2 a finding that has since been replicated in several independent studies.3–6 The 9p21.3 rs1333049 variant is common and may potentially be added to risk profiling in the future. Already it has been reported that adding the 9p21.3 genotype to the traditional risk score significantly improves CAD risk prediction in the community.