Relationship of serum sodium concentration to mortality in a wide spectrum of heart failure patients with preserved and with reduced ejection fraction: an individual patient data meta-analysis 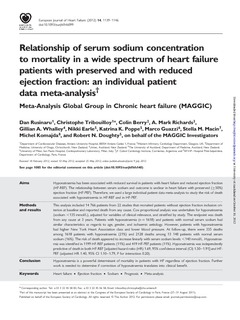 Hyponatraemia (usually defined as a serum sodium concentration,135 mmol/L)1 is observed in 20% of patients admitted to hospital for heart failure (HF).2 – 4 Studies conducted in various patient populations of chronic and acutely decompensated HF have shown an association between low serum sodium concentration and poor prognosis.2 – 7 Most of these studies were focused on short-term outcomes.2 – 4 Risk models developed in different HF cohorts of outpatients 8,9 and hospitalized patients10212 have suggested that hyponatraemia is one of the most powerful predictors of mortality in HF. Few studies that investigated the relationship between serum sodium concentration and outcome have included patients with heart failure and preserved ejection fraction (HF-PEF).2,9,12 – 14 It is now clear that HF-PEF accounts for a substantial proportion of cases of HF15,16 and has distinct features compared with heart failure with reduced ejection fraction (HF-REF).16 The prognostic role of hyponatraemia has not been well investigated in HF-PEF. Despite an increasing awareness of the prognostic role of hyponatraemia in HF, treatment strategies remain elusive and, in recent clinical trials, vasopressin receptor antagonists did not reduce mortality.