Gender and survival in patients with heart failure: interactions with diabetes and aetiology. Results from the MAGGIC individual patient meta-analysis 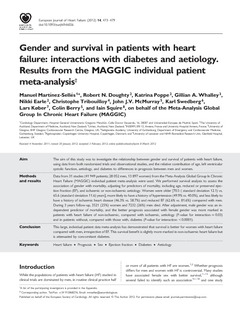 While the populations of patients with heart failure (HF) studied in clinical trials are dominated by men, in routine clinical practice half or more of all patients with HF are women.1,2 Whether prognosis differs for men and women with HF is controversial. Many studies have associated female sex with better survival,1 – 14 although several failed to identify such an association15 – 18 and one study has reported worse prognosis for women.19 Moreover, in HF populations, sex is strongly associated with a number of clinical variables that influence prognosis such as age, aetiology, and in particular left ventricular ejection fraction (EF), associations which may confound the independent effect of sex on survival. Assessment of the relationship between sex and prognosis is further complicated by the relatively small numbers of women in randomized, controlled trials involving patients with HF, in large part due to the exclusion from these trials of older patients and patients with HF with preserved EF, both of which are more prevalent among women with HF.