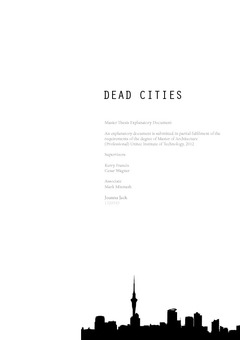 This research project explores through architecture, the lost relationship between cities of the living and cities of the dead in urban centres. Proposing the question: How can architecture re-connect/re-engage cities of the living with cities of the dead? Through the application of precedent and site analysis, this project focuses on an attempt to bring people, in the urban context, closer to the realities of human passing. Also to investigate how a sacred place for the dead would fit into a current living city. The term ‘cities of the dead’ is suggestive of a concentrated area populated by the remains of the dead within the established boundaries of a living city. The result is an architectural proposal for Symonds Street Cemetery which re-connects the space as an integral part of Auckland City. This solution would benefit the city by raising consciousness of the realities of death for the living and providing a respectful space for the dead within an urban area.