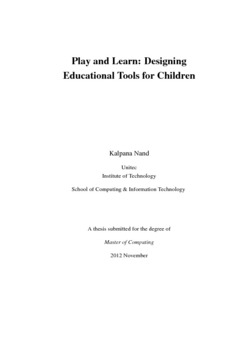 Nand, K. (2012). Play and learn : designing educational tools for children. A thesis submitted for the degree of Master of Computing, Unitec Institute of Technology, New Zealand.

Pedagogy is a dynamic science and needs to constantly change with time. During the last decade, there has been a substantial jump in terms of communications technology, the ubiquity of electronic devices capable of running applications, and having access to information on the internet. The technological developments have been able to grip a major part of society, particularly in the form of entertainment. One technology that has gripped society, particularly children, is playing of Computer based games, simulating either a real life scenario or a completely fictional one. The success rate of computer games in engaging and motivating children has prompted educational researchers to see if similar techniques can be used to engage children into learning related tasks. This thesis is one such study. In this thesis, we investigate what the appealing characteristics of effective computer games for children are, whether adding these appealing characteristics to an educational tool enhances children’s learning and whether children enjoy using the proposed educational tool with those characteristics embedded. Then we present the results of an experiment done on primary school children, in which a computer game was used as an educational tool to teach primary school curriculum areas of Numeracy and Te Reo. The study used computer gaming industry research works, in conjunction with primary school children’s perception of computer games, to identify the three most prominent features that make them popular. The identified features were feedback, challenge and graphics. These features were then embedded in an open source game, Who Wants to be a Millionaire, based on a popular TV game, and modified to teach the two curriculum areas to 9 and 10 year old children in a primary school in Auckland, over a period of 4 weeks. The effectiveness of the educational tool was measured using a pre-test and a post-test, as well as other indicators such as the frequency and duration of time on playing the game. The results showed that the features enriched game was more effective as an educational tool in both Numeracy and Te Reo curriculum areas, when compared to the version with minimal features, that is, feature devoid version. In the case of Numeracy, the increase in scores was twice as much as the feature devoid version and in the case of Te Reo it was five times as much. Similar results were also shown by other indicators such as time and frequency. In summary, the results of this thesis establishes evidence on aspects. Firstly, it identifies the most appealing characteristics of computer games from primary school children’s point of view, as well as literature. Secondly, the results show that the identified features can be effectively used to develop educational tools, similar to computer games that can enhance children’ learning. Finally, the results prove that the feature enriched game was more popular with children and they were more inclined to play this version of the game in future compared to the feature devoid version.