Experienced principals’ accounts of their character development : their inside stories 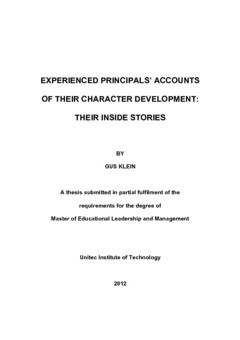 Klein, G. (2012). Experienced principals’ accounts of their character development: Their inside stories. A thesis submitted in partial fulfilment of the requirements for the degree of Master of Educational Leadership and Management, Unitec Institute of Technology, New Zealand.

RESEARCH QUESTIONS: 1. What is character and how is it related to leadership? 2. How do experienced principals account for their development of character with reference to: a. the development of their self-awareness and awareness of others? b. their leadership principles? c. their espoused core values? 3. How do experienced principals perceive their character has facilitated their growth as school leaders? The aim of this research was to examine experienced principals’ stories of how they gave account of their character development and how this made an impact on their practice as leaders. Six experienced primary school principals from low decile schools in Auckland were selected. The research was in the form of a narrative, with the data being collected using semi-structured interviews and were in the form of stories. Each interview revealed the unique character and values of each participant. Personal values were shaped from mostly their early lives from parents and in some cases extended family or other people. Most of the values focused on behaviour that revealed the importance of caring for others, trust, family, and humility. Further to these historical values, the participants revealed significant others in their lives decreased as they became more experienced as principals. Before becoming a principal, several people they mentioned who had impacted their lives, though this did not reflect their current situation. Principalship was also seen to be the context where most of the character development took place, suggesting that learning when applied to a leader’s character, is lived experience; it cannot be taught first. The findings indicated both character and competence play a strong role in the participant’s principalship. Participants who developed their own selfawareness and awareness of others were able to lead effectively by creating teams that complemented their strengths and weaknesses. Values and beliefs also proved to be an important aspect, as these dictated the way the participant handled their governing educational values and their interaction with staff. Moral dilemmas for the participants were more or less confined to taking action in relation to staff and community issues. There was a suggestion that larger dilemmas could occur when the participant’s governing educational values conflicted with changes being asked of their school by policy makers. Therefore, an overall finding of this study is that leadership is more than developing a set of skills but also includes the character of the leader, and that character and its development is unique which in turn makes it difficult to find a general definition of leadership.