The rediscovery of the sixth façade through gravitational explorations 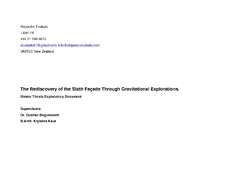 Tostado Rodriguez, A. (2012). The rediscovery of the sixth façade through gravitational explorations. Master Thesis Explanatory Document. [submitted in partial fulfilment for the requirements of Master of Architecture (Professional), Unitec Institute of Technology, New Zealand].

The main purpose of this project is to give relevance to an often-neglected element in architecture: the Sixth Façade. This is done by an exploration of the role of gravitation in architecture. The sixth façade is the underside of a building, only appreciated when the building cantilevers or “floats”, above the ground. So, the question is: How can we show people the sixth façade in a way that grabs their attention and creates a lasting image in their minds? Architectural explorations that appear to defy gravity, as we normally perceive it, are essential to the development of this project. This project defies the established idea of the relationship between function, building and site by redefining how the building interacts with the land it “stands on”. If a building does not stand on the ground, it appears to defy the established gravitas/levitas conditions in conventional architecture. The resulting visual paradox leads to tension between an expected image of a building and the unexpected “floating” building. “Buildings are furthermore related to their environment by resting on the ground and rising towards the sky”. The idea of a “floating” building challenges the traditional relationship of the building to its immediate environment; the building relates to its surroundings differently when it “hovers” above its surroundings. By removing the building from its resting place on the ground, the way we normally perceive buildings change. Instead of having buildings that “rise towards the sky” we end up having something different and unexpected, in this case, buildings that rise towards the ground. The gravitational explorations will help achieve certain unexpected experiences, particularly making the inhabitant aware of gravity, as we in fact tend to forget it. Our attention is normally driven away from the things that we know well by those things that are new to us. The unexpected sensorial experiences are those experiences given to us by our five senses that are either new, or rare within our memory. This project defies gravity through the rediscovery of the sixth façade by incorporating it in an unorthodox building program: A Circus School under a motorway viaduct. “I enter a building, see a room, and – in the fraction of a second – have this feeling about it. We perceive atmosphere through our emotional sensibility – a form of perception that woks incredibly quickly, and which we humans evidently need to help us survive…- just two seconds and we’re there!”. The creation of valuable moments in the inhabitant’s mind through unexpected sensorial experiences is perhaps the single most important challenge of this project. The single most important special moment sought in this project is when the inhabitant or visitor experiences the sixth façade for the first time, creating a valuable memory that would later make him or her look for it in the future. The project is successful whenever the inhabitant or visitor notices and recognizes the existence of a sixth façade.