The manifestation of race in everyday communication interactions in New Zealand 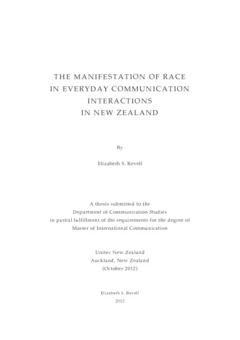 Revell, E.S. (2012). The manifestation of race in everyday communication interactions in New Zealand. An unpublished thesis submitted to the Department of Communication Studies in partial fulfillment of the requirements for the degree of Master of International Communication Unitec Institute of Technology, Auckland, New Zealand.

In answering the main research question about the manifestation of race in everyday communication interactions in New Zealand, the author found that in public contexts in New Zealand, race as a topic is taboo and racists are social pariahs amongst Western, educated, middle-class members of society. Consequentially, race is often manifested in a variety of subtle ways in everyday communication interactions, and is difficult to identify and challenge. The subtle way in which race is manifested in everyday settings masks an undercurrent of prejudice and hostility. Whether or not these hidden tensions will emerge problematically in the future remains to be seen, as New Zealanders negotiate and manage their biculturalism and multiculturalism. In terms of the significance of race in New Zealand, the author concluded that New Zealand’s racial and ethnic identity is changing (browning), and that the longstanding New Zealand European (White) majority is decreasing in proportion and dominance. Some New Zealand Europeans are consciously and subconsciously trying to assert their authority, refusing to let the idea that a ‘true’ New Zealander is ‘White’ go because of a) a subconscious belief in the superiority of White skin and/or Western culture, and b) insecurity around what will happen to them and their lifestyle, if non-White ethnic and non-Western cultural groups continue to gain in proportion to White, Western groups. As a result, some non-White individuals are experiencing being subtly and overtly ‘othered’, excluded, disrespected, and negatively stereotyped. Being subjected to everyday racism has resulted in some non-White New Zealanders having a fractured sense of identity, and others having adopted the racist worldview of Whites.