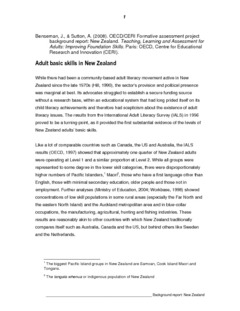 While there had been a community-based adult literacy movement active in New Zealand since the late 1970s (Hill, 1990), the sector’s provision and political presence was marginal at best. Its advocates struggled to establish a secure funding source without a research base, within an educational system that had long prided itself on its child literacy achievements and therefore had scepticism about the existence of adult literacy issues. The results from the International Adult Literacy Survey (IALS) in 1996 proved to be a turning-point, as it provided the first substantial evidence of the levels of New Zealand adults’ basic skills. Like a lot of comparable countries such as Canada, the US and Australia, the IALS results (OECD, 1997) showed that approximately one quarter of New Zealand adults were operating at Level 1 and a similar proportion at Level 2. While all groups were represented to some degree in the lower skill categories, there were disproportionately higher numbers of Pacific Islanders,1 Maori2, those who have a first language other than English, those with minimal secondary education, older people and those not in employment. Further analyses (Ministry of Education, 2004; Workbase, 1998) showed concentrations of low skill populations in some rural areas (especially the Far North and the eastern North Island) and the Auckland metropolitan area and in blue-collar occupations, the manufacturing, agricultural, hunting and fishing industries. These results are reasonably akin to other countries with which New Zealand traditionally compares itself such as Australia, Canada and the US, but behind others like Sweden and the Netherlands.