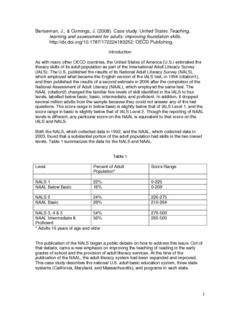 As with many other OECD countries, the United States of America (U.S.) estimated the literacy skills of its adult population as part of the International Adult Literacy Survey (IALS). The U.S. published the results of its National Adult Literacy Survey (NALS), which employed what became the English version of the IALS test, in 1994 (citation1), and then published the results of a second estimate in 2006 after the completion of the National Assessment of Adult Literacy (NAAL), which employed the same test. The NAAL (citation2) changed the familiar five levels of skill identified in the IALS to four levels, labelled below basic, basic, intermediate, and proficient. In addition, it dropped several million adults from the sample because they could not answer any of the test questions. The score range in below basic is slightly below that of IALS Level 1, and the score range in basic is slightly below that of IALS Level 2. Though the reporting of NAAL levels is different, any particular score on the NAAL is equivalent to that score on the IALS and NALS.