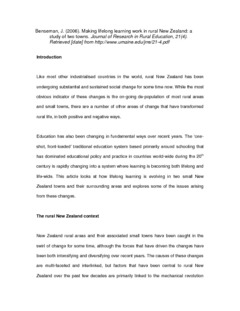 Like most other industrialised countries in the world, rural New Zealand has been undergoing substantial and sustained social change for some time now. While the most obvious indicator of these changes is the on-going de-population of most rural areas and small towns, there are a number of other areas of change that have transformed rural life, in both positive and negative ways. Education has also been changing in fundamental ways over recent years. The ‘one-shot, front-loaded’ traditional education system based primarily around schooling that has dominated educational policy and practice in countries world-wide during the 20th century is rapidly changing into a system where learning is becoming both lifelong and life-wide. This article looks at how lifelong learning is evolving in two small New Zealand towns and their surrounding areas and explores some of the issues arising from these changes..

Journal of Research in Rural Education