Paradigm re-gained? the re-emergence of lifelong learning in New Zealand in the late 1990s 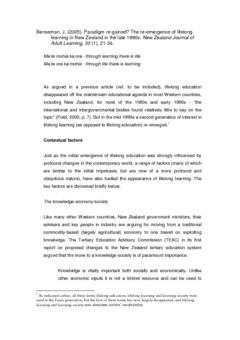 As argued in a previous article (ref. to be included), lifelong education disappeared off the mainstream educational agenda in most Western countries, including New Zealand, for most of the 1980s and early 1990s - “the international and intergovernmental bodies found relatively little to say on the topic” (Field, 2000, p. 7). But in the mid-1990s a second generation of interest in lifelong learning (as opposed to lifelong education) re-emerged.