The Pope, the Prophet and the Internet 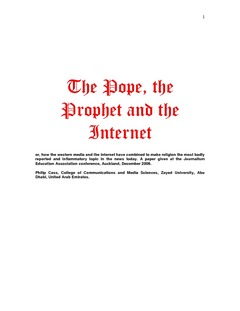 Cass, P. (2006, December). The Pope, the Prophet and the Internet. conference contribution - paper in published proceedings.

In the past 12 months, the media has reported on two major religious stories; the furore over the Danish cartoons and Pope Benedict XVI's speech at Regensburg. Both were instances of what were relatively small incidents blown into global problems by the media and what we might call the anti-media of the internet. Although the stories originated in Europe and the majority of protests originated in the Middle East, their effect was felt as far afield as the Pacific. The way in which the stories were reported in western and Middle Eastern media demonstrated, on the one hand, an almost complete incomprehension by European media of Muslim outrage at the cartoons and, in the Middle East, an equal incomprehension of what the Pope had actually said. Both stories reflected poorly on the media's ability to report accurately and objectively on religious matters. In an age when religion rather than politics is the driving force behind so much of what is happening, and especially at a time when the internet allows so much unmediated and uncontextualised material to influence people's thinking, this is extraordinarily dangerous.