“How do you know that I don't understand?" A look at the future of intelligent tutoring systems 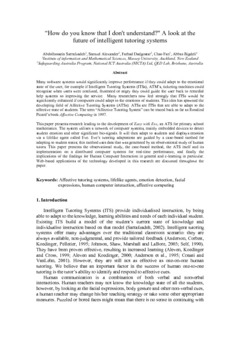 Many software systems would significantly improve performance if they could adapt to the emotional state of the user, for example if Intelligent Tutoring Systems (ITSs), ATM’s, ticketing machines could recognise when users were confused, frustrated or angry they could guide the user back to remedial help systems so improving the service. Many researchers now feel strongly that ITSs would be significantly enhanced if computers could adapt to the emotions of students. This idea has spawned the developing field of Affective Tutoring Systems (ATSs): ATSs are ITSs that are able to adapt to the affective state of students. The term “Affective Tutoring System” can be traced back as far as Rosalind Picard’s book Affective Computing in 1997. This paper presents research leading to the development of Easy with Eve, an ATS for primary school mathematics. The system utilises a network of computer systems, mainly embedded devices to detect student emotion and other significant bio-signals. It will then adapt to students and displays emotion via a lifelike agent called Eve. Eve’s tutoring adaptations are guided by a case-based method for adapting to student states; this method uses data that was generated by an observational study of human tutors. This paper presents the observational study, the case-based method, the ATS itself and its implementation on a distributed computer systems for real-time performance, and finally the implications of the findings for Human Computer Interaction in general and e-learning in particular. Web-based applications of the technology developed in this research are discussed throughout the paper.