The perception and response to change by members of a multicultural working group : a case study 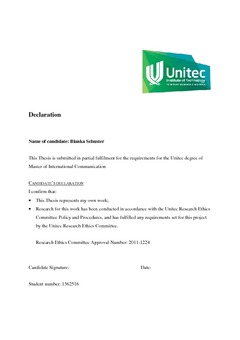 Schuster, B. (2012). The perception and response to change by members of a multicultural working group : a case study. (Unpublished document submitted in partial fulfilment of the requirements for the degree of Master of International Communication). Unitec Institute of Technology, Auckland, New Zealand. Retrieved from https://hdl.handle.net/10652/2039

This research project explores the perception of members of a multicultural working group to communication relating to organisational change, and their response to it. For the analysis the impact of cultural dimensions such as “power distance” and “uncertainty avoidance” on this perception were investigated. A broadly qualitative approach using a case study methodology within a tertiary educational organisation in New Zealand was chosen to address the complex nature of intercultural communication issues implied in this goal. A mixed-methods two phase design was planned. In the first phase, quantitative data were collected through an exploratory survey to provide a general overview of how change communication was perceived, and an indication of possible trends relating to culture. This phase helped conceptualise the second qualitative phase, in which in-depth data were collected through a focus group and individual interviews. The findings of the study indicate that national culture may play a role in people’s attitude towards hierarchy and their perceptions of managers’ and staff members’ communication style and cultural dimensions appear to be partly relevant. But the findings also illustrate that ethnic culture is not the only influence on an individual’s perception and behaviour during change. Organisational culture, for instance, can positively influence whether employees voice their opinion amongst one other and whether they give feedback to their superiors. Moreover, the findings indicate that variations in communication style can lead to differing perceptions of a behavioural response to change. For example, voicing a critical opinion straightforwardly may be viewed as appropriate or inappropriate depending on the cultural background of the receiver. Additionally, the findings show some agreement between members of a multicultural working group such as what is important information during change, which management level should provide this information, and in what way communication should be managed in order to effectively engage organisational members. Importantly, national culture was not viewed as an additional barrier to communication during change implementation. Finally, the findings show that although intercultural communication competence is valued for all members in a multicultural organisation, including managers, other culturally independent characteristics like interpersonal competence were assessed as similar or more important. The outcomes of this study point to the need for further research to address the complexity of culture in its interplay with other major factors for efficient communication in multicultural settings.