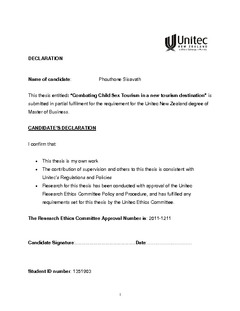 This thesis investigated the current situation of child sex tourism (CST) at global, regional and national levels, while commercial sexual exploitation of children (CSEC) is also frequently mentioned and discussed throughout this thesis. This is partly because the scale limitations of a master thesis have led the researcher to focus on CST, and partly because CST is one of four forms of CSEC that are closely linked to each other (Pimonsaengsuriva, 2008). These forms of CSEC can be found in a later section. In parallel with the increasing trend of the tourism industry at national, regional and global levels (Child Wise Australia, 2009; United Nations World Tourism Organisation, 2011), it is argued that sexual exploitation of children in the tourism sector might also increase, especially in developing countries in the Southeast Asian region. Therefore, the Lao People's Democratic Republic (Lao PDR) was chosen as a case study site in order to help the country in preventing and combating CST. In order to carry out the research, a qualitative research approach was adopted. 13 interviews were conducted, 8 of which were conducted with representatives of Lao government agencies and the other 5 were conducted with international organisations. In order to carry out the interviews and collect data, 10 fundamental interview questions were created. After analysing the findings, the researcher can conclude that developing countries, Laos in particular, can do better to prevent and combat the issue of child sexual exploitation if they can learn from past experiences in other countries. To achieve this, all forms of CSEC, which include child labour, child trafficking, child pornography, child sex tourism and child sexual abuse have to be combated as well as prevented simultaneously. Child protection, prevention and rehabilitation, and reintegration initiatives should be in place, and these initiatives should be effectively implemented if the fight against CST is to be achieved. Moreover, co-operation in terms of financial and human resources from all sectors concerned, at all levels from global to local, is crucial for the sustainability and effectiveness of the intervention. More research is needed concerning the effectiveness of the existing child protection mechanisms and initiatives. It is expected that the results of this research could valuably contribute to strengthen these mechanisms to reach an optimal outcome. This research is expected to give a broader picture of the issue to any shareholders concerned, especially in Laos, and to better understand and work together in order to combat and protect children from the sexual exploitation phenomenon.