The never-ending story: Palestine, Israel and The West Wing 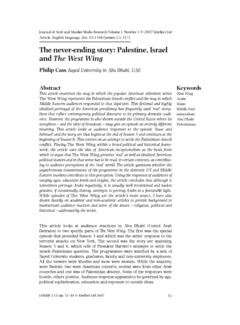 This article examines the way in which the popular American television series The West Wing represents the Palestinian–Israeli conflict and the way in which Middle Eastern audiences responded to that depiction. This fictional and highly idealized portrayal of the American presidency has frequently used ‘real’ storylines that reflect contemporary political discourse to its primary domestic audience. However, the programme is also shown outside the United States where its storylines – and the time of broadcast – may give an episode an entirely different meaning. This article looks at audience responses to the episode ‘Isaac and Ishmael’ and the story arc that begins at the end of Season 5 and continues at the beginning of Season 6. This centres on an attempt to settle the Palestinian–Israeli conflict. Placing The West Wing within a broad political and historical framework, the article uses the idea of American exceptionalism as the basis from which to argue that The West Wing presents ‘real’ as well as idealized American political stances and in that sense has to be read, in certain contexts, as contributing to audience perceptions of the ‘real’ world The article questions whether the asynchronous transmissions of the programme in the domestic US and Middle Eastern markets contribute to this perception. Using the responses of audiences of varying ages, education levels and origins, the article concludes that although it sometimes portrays Arabs negatively, it is usually well intentioned and makes genuine, if occasionally clumsy, attempts to portray Arabs in a favourable light. While episodes of The West Wing are the article’s main source, I have also drawn heavily on academic and non-academic articles to provide background to mainstream audience reaction and some of the issues – religious, political and historical – addressed by the series.