Newspaper Archiving In The UAE 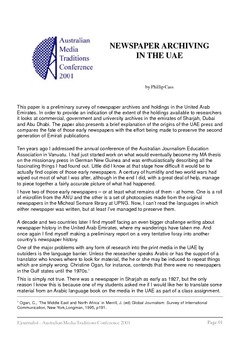 This paper is a preliminary survey of newspaper archives and holdings in the United Arab Emirates. In order to provide an indication of the extent of the holdings available to researchers, it looks at commercial, government and university archives in the emirates of Sharjah, Dubai and Abu Dhabi. The paper also presents a brief explanation of the origins of the UAE press and compares the fate of those early newspapers with the effort being made to preserve the second generation of Emirati publications