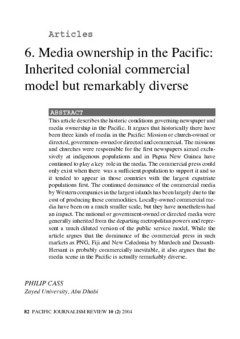 This article describes the historic conditions governing newspaper and media ownership in the Pacific. It argues that historically there have been three kinds of media in the Pacific: Mission or church-owned or directed, government- owned or directed and commercial. The missions and churches were responsible for the first newspapers aimed exclusively at indigenous populations and in Papua New Guinea have continued to play a key role in the media. The commercial press could only exist when there was a sufficient population to support it and so it tended to appear in those countries with the largest expatriate populations first. The continued dominance of the commercial media by Western companies in the largest islands has been largely due to the cost of producing these commodities. Locally-owned commercial media have been on a much smaller scale, but they have nonetheless had an impact. The national or government-owned or directed media were generally inherited from the departing metropolitan powers and represent a much diluted version of the public service model. While the article argues that the dominance of the commercial press in such markets as PNG, Fiji and New Caledonia by Murdoch and Dassault-Hersant is probably commercially inevitable, it also argues that the media scene in the Pacific is actually remarkably diverse.