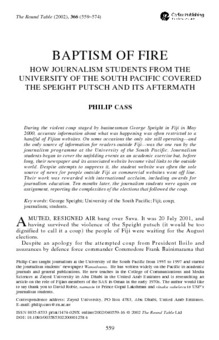 During the violent coup staged by businessman George Speight in Fiji in May 2000, accurate information about what was happening was often restricted to a handful of Fijian websites. On some occasions the only site still operating—and the only source of information for readers outside Fiji—was the one run by the journalism programme at the University of the South Pacific. Journalism students began to cover the unfolding events as an academic exercise but, before long, their newspaper and its associated website became vital links to the outside world. Despite attempts to suppress it, the student website was often the sole source of news for people outside Fiji as commercial websites went off line. Their work was rewarded with international acclaim, including awards for journalism education. Ten months later, the journalism students were again on assignment, reporting the complexities of the elections that followed the coup.