Rio 2016 : sailing in the post-Olympic hangover. Design for a marina and sailing school for the 2016 Olympic Games in Rio de Janeiro. 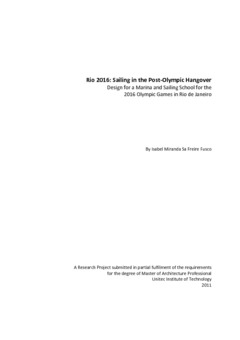 Sa Freire Fusco, I.M. (2011). Rio 2016: Sailing in the post-Olympic hangover. Design for a marina and sailing school for the 2016 Olympic Games in Rio de Janeiro. A Research Project submitted in partial fulfilment of the requirements for the degree of Master of Architecture (Professional), Unitec Institute of Technology, New Zealand.

The research question looks primarily at how the design for an Olympic venue, which is usually aiming to cater for the needs of a short term event, can benefit and contribute to the city and the life style of local communities in the long term, while also acknowledging the local environment and the local culture. On an urban scale the research analyses how the design for the development of the waterfront can improve the urban infrastructure in general. The two most common problems of projects for Olympic venues are that they either provide temporary infrastructures which have their use limited to the games, or they provide permanent infrastructures which are right for the competition, but have little or no use to the community outside the Olympic environment. The objective of this thesis is to investigate how the design for an Olympic venue can benefit and contribute to the city and the lifestyle of local communities in the long term, while acknowledging the local environment and the local culture. The background for this investigation is the 2016 Olympic and Paralympic Games in Rio de Janeiro. The project aims to re-develop the existing Marina da Glória in Rio de Janeiro in order to host the sailing competitions of 2016, while focusing on the post-Olympic use of the Marina. By redeveloping the Marina the project also deals with the revitalization of the Rio de Janeiro water front and Flamengo Park, where it is situated. It addresses issues of connectivity and integration between the coast, the park and the urban fabric. Based on the notion that a design intervention should be in tune with its context, the project applies urban and architectural design strategies that have the existing cultural and built environment of Brazil and Rio de Janeiro as a source of inspiration. These strategies – which include coastal reclamation, urban connectivity (reconnecting the park and the coast back to the city), and flexibility of compositional arrangement - provide a response to difficult context issues and to the problem of long term versus short term use. They also grant the final design a well balanced combination of formalist and functionalist aspects in the best tradition of the modern Brazilian architecture.