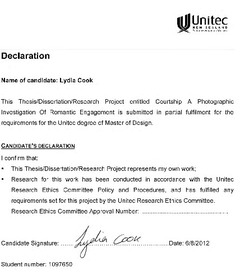 Cook, L.R. (2011). Courtship: A photographic investigation of romantic engagement. A thesis submitted in partial fulfilment of the requirements for the degree of Masters of Design, Unitec Institute of Technology, New Zealand.

RESEARCH QUESTION: How is contemporary romantic courtship evolving with reference to the influence of fairy tale convention? The research title of my project is: Courtship: A photographic investigation of romantic engagement. The research question is concerned with the evolution of romantic courtship with reference to the influence of fairytale conventions. The project aims to produce a photographic series and exegesis, which explore the constructs embodied in traditional fairytales in the context of social and aesthetic behaviours in courtship. The project started with an investigation of both academic references and contemporary artists. My Initial experimentation created works that communicated ideas surrounding themes such as fairytales, romance and gender confusion. I became interested in finding connections between academic and creative concepts such as the aesthetics of gender identity and the psychology of courtship and fairytales. By engaging in a creative process and exploring references that influenced the works, I was able to question and explore these themes through performing roles of both genders within the creation of characters. This exegesis essentially tracks my creative process, research and the questions and challenges I have faced along the way.