The adaptation of Islamic culture in a western society : building a contemporary mosque in Auckland. 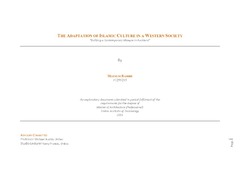 Rashid, M. (2011). The adaptation of Islamic culture in a western society: Building a contemporary mosque in Auckland. An explanatory document submitted in partial fulfilment of the requirements for the degree of Master of Architecture (Professional), Unitec Institute of Technology, New Zealand.

Though it is from the East that the sun rises, showing itself bold and bright without a veil, it burns and blazes with inward fire only when it escapes from the shackles of east and west..."(3) - Muhammad Iqbal The Mosque(4) , Masjid (from Arabic) is the most important institution of the Muslim world, also the predominant built form of Islamic architecture. We can clearly identify that the unique form of the Mosque, is derived from the essence of Islam itself, purity, simplicity and humbleness. The breakage of this essence is what has led to what we identify as the 'crisis'. The crisis is referring to the institutional/spatial organisation and architecture of the Mosque. (5) Nowadays we find a tendency for the Mosque to be an architectural symbol catering mostly for the religious rights of the Muslim world, rather than catering for the everyday Muslim way of life. The Mosque in non-Muslim, Western Countries (in this instance New Zealand) needs to begin with understanding it as in institution in built form, and its meaning and purpose in a diverse and changing society, through development of a conceptual architectural framework. The purpose of this thesis is to investigate the possibility of designing an Islamic Centre that encourages the integration of Muslims and non-Muslims in a western context, in addition to provide a tangible solution to the Mosque 'crisis', which caters for the day to day activities of the community. 3 Mustansir Mir, "Tulip in the desert: a selection of the poetry of Muhammad Iqbal" London, 2000, 94 4 Here and throughout the thesis, the term Mosque is understood not merely as a single built form, but a multivalent institution where the act of prayer is the main part of it, together with social, culture, educational and other activities related to the society. 5 Mohamad Tajuddin Haji Mohamad Rasdi, 'The Mosque as Community Development Centre' Johor: Penerbit Universti Teknologi Malaysia, 1998, 17-30