The Code of Social and Family Responsibility: Voyaging across the knowledge gap? 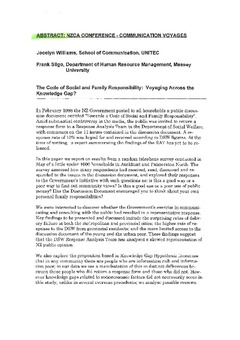 In February 1998 the NZ Government posted to all households a public discussion document entitled "Towards a Code of Social and Family Responsibility". Amid substantial controversy in the media, the public was invited to return a response form to a Response Analysis Team in the Department of Social Welfare, with comments on the 11 issues contained in the discussion document. A response rate of 10% was hoped for and received according to DSW figures. At the time of writing, a report summarising the findings of the RAT has yet to be released. In this paper we report on results from a random telephone survey conducted in May of a little under 1000 households in Auckland and Palmerston North. The survey assessed how many respondents had received, read, discussed and responded to the issues in the discussion document, and explored their responses to the Government's initiative with such questions as: is this a good way or a poor way to find out community views? Is this a good use or a poor use of public money? Has the Discussion Document encouraged you to think about your own personal family responsibilities? We were interested to discover whether the Government's exercise in communicating and consulting with the public had resulted in a representative response. Key findings to be presented and discussed include the surprising rates of delivery failure in both the metropolitan and provincial cities; the higher rate of response to the DSW from provincial residents; and the more limited access to the discussion document of the young and the urban poor. These findings suggest that the DSW Response Analysis Team has analysed a skewed representation of NZ public opinion. We also explore the proposition based in Knowledge Gap Hypothesis literature that in any community there are people who are information rich and information poor; in our data we see a manifestation of this in distinct differences between those people who did return a response form and those who did not. However knowledge gaps related to socioeconomic factors did not necessarily occur in this study, unlike in several overseas precedents; we analyse possible reasons.