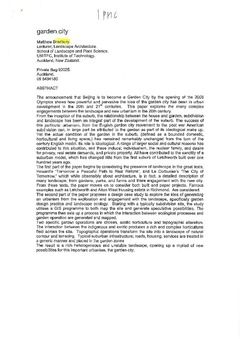 The announcement that Beijing is to become a Garden City by the opening of the 2008 Olympics shows how powerful and pervasive the idea of the garden city has been in urban development in the 20th and 21st centuries. This paper explores the many complex engagements between the landscape and new urbanism in the 20th century. From the inception of the suburb, the relationship between the house and garden, subdivision and landscape has been an integral part of the development of the suburb. The success of this particular urbanism, from the English garden city movement to the post war American subdivision can, in large part be attributed to the garden as part of its ideological make up. Yet the actual condition of the garden in the suburb, (defined as a bounded domestic, horticultural and living space,) has remained remarkably unchanged from the tum of the century English model. Its role is ideological. A range of larger social and cultural reasons has contributed to this situation, and these include; individualism, the nuclear family, and desire for privacy, real estate demands, and private property. All have contributed to the sanctity of a suburban model, which has changed little from the first suburb of Letchworth built over one hundred years ago. The first part of the paper begins by considering the presence of landscape in the great texts; Howard's 'Tomorrow a Peaceful Path to Real Reform', and Le Corbusier's 'The City of Tomorrow: which while ostensibly about architecture, is in fact, a detailed description of many landscape; from gardens, parks, and farms and there engagement with the new city. From these texts, the paper moves • on to consider both built and paper projects. Famous examples, such as Letchworth and Alton West Housing estate in Richmond, are considered. The second part of the paper proposes a design case study to explore the idea of generating an urbanism from the exploration and engagement with the landscape, specifically garden design practice and landscape ecology. Starting with a typically subdivision site, the study utilises a GIS programme to both map the site and generate speculative possibilities. The programme then sets up a process in which the interaction between ecological processes and garden operation are generated and mapped. Two specific garden operations are chosen, exotic horticulture and topographic alteration. The interaction between the indigenous and exotic produces a rich and complex horticultural field across the site. Topographic operations transform the site into a landscape of natural contour and terracing. Typical suburban infrastructure; roads, housing, services are treated in a generic manner and placed in the garden zones The result is a rich heterogeneous and unstable landscape, opening up a myriad of new possibilities for this important urbanism, the garden city.