Street combing: An investigation into the use of found materials from the urban landscape in contemporary jewellery making 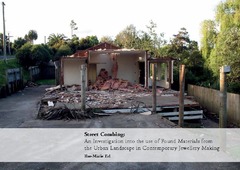 Erl, I.-M. (2011). Street combing: An investigation into the use of found materials from the urban landscape in contemporary jewellery making. (Unpublished document submitted in partial fulfilment of the requirements for the degree of Master of Design). Unitec Institute of Technology. Retrieved from https://hdl.handle.net/10652/1922

My Masters by Research project took me from the insular environs of the jewellery workbench to the social environs of urban Auckland and Taipei. Directed by the writing of contemporary jewellers, such as Roseanne Bartley and Jason Wade, I examined methods of process-driven making, participation, collaboration, the ‘performative’, and social value. Through research I was drawn to a revised and expanded arena where jewellery processes may relate to an entire social body, rather than being limited to the creation of objects pertaining to a single body. This investigation of social value and meaning latent in contemporary jewellery practice engaged me in unanticipated notions of preciousness. The research culminated in the creation of a counter-memorial in the Auckland suburb of Waterview, a neighbourhood in which 115 houses and a park will be destroyed to make way for a state highway extension. Guided by the model of ‘the urban physiognomist’ as described by Walter Benjamin, discourses on countermemorials articulated by theorist James E. Young, and the work of practitioners such as Jochen Gerz and Rachel Whiteread, I responded to a community confronted by major urban development. Processes typically employed within my jewellery making practice, were transferred and applied within the setting of a public walkway. 115 elements (core samples from homes to be destroyed or reflective car head and tail light plastic) were implanted, without official sanction, in trees in the northern end of Oakley Creek Walkway. Remnants of places where people once lived or the machine that led to their destruction have been transposed to function not only as a geological information system, but as social, historical and political signifiers. A trail of trees has been activated as a locket of community memory, and might now be understood as public jewellery.