Bridge the border: A border crossing complex across the Johor Strait 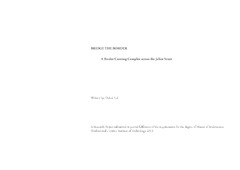 Lai, D. (2011). Bridge the border: A border crossing complex across the Johor Strait. (Unpublished document submitted in partial fulfilment of the requirements for the degree of Master of Architecture (Professional)). Unitec Institute of Technology, Auckland, New Zealand. Retrieved from https://hdl.handle.net/10652/1918

This project started from the author’s dissatisfaction and frustration at crossing the border. In the current climate of global terrorism and security concerns, movement across the Singapore-Malaysia border is increasingly criminalised. Accordingly, the border crossing building is often authoritarian, represents its power and control, and renders one’s border crossing experience rather rigid and uncomfortable. It thus led to the initial idea of designing a border crossing building in the Republic of Singapore that could break away from the typically hostile characteristics of these buildings. This could be driven by a more inviting, contemporary, connective and symbolic architecture that serves as a gateway into the country rather than more austere functional requirements and utility. However, as the author investigated the multiple dimensions of the border in relation to sentimental values, bilateral conflict and cooperation, it was realised that the international footprint of the border is far more complicated than the actual building itself. The border of Singapore and Malaysia marks a common history. It was built up, dissolved and then reformatted. This border today sees an immense amount of traffic, people and goods flow as a result of close social and economic relationships. Inspired by the open borders in Europe and based on the assumption that, in the future, a more open border will be developed between the two countries, the idea of designing a single border crossing building for the two countries emerged. Essentially, the proposed design is an inhabited bridge. A bridge is a necessity for land entries as the border between Singapore and Malaysia lies in the narrow Johor Strait. The project thus endeavours to accentuate the importance of the bridge, not only as a physical link over the natural water obstacle, but also as a critical symbol of penetration and connection though the man-made barrier – the normally fortified border. Finally, it is proposed to integrate the bridge and the border crossing building together across the border land where the inseparable relationship begins.