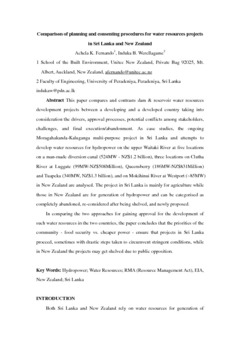 Fernando, A., & Werellagama, I. (2008). Comparison of planning and consenting procedures for water resources projects in Sri Lanka and New Zealand. In F. Tian & G. Ni (Eds.). Proceedings of the Fourth Conference of the Asia Pacific Association of Hydrology and Water Resources. Beijing: Zhongguo shui li shui dian chu ban she.

This paper compares and contrasts dam & reservoir water resources development projects between a developing and a developed country taking into consideration the drivers, approval processes, potential conflicts among stakeholders, challenges, and final execution/abandonment. As case studies, the ongoing Moragahakanda-Kaluganga multi-purpose project in Sri Lanka and attempts to develop water resources for hydropower on the upper Waitaki River at five locations on a man-made diversion canal (524MW - NZ$1.2 billion), three locations on Clutha River at Luggate (99MW-NZ$508Million), Queensberry (186MW-NZ$831Million) and Tuapeka (340MW, NZ$1.3 billion), and on Mokihinui River at Westport (~85MW) in New Zealand are analysed. The project in Sri Lanka is mainly for agriculture while those in New Zealand are for generation of hydropower and can be categorised as completely abandoned, re-considered after being shelved, and newly proposed. In comparing the two approaches for gaining approval for the development of such water resources in the two countries, the paper concludes that the priorities of the community - food security vs. cheaper power - ensure that projects in Sri Lanka proceed, sometimes with drastic steps taken to circumvent stringent conditions, while in New Zealand the projects may get shelved due to public opposition.