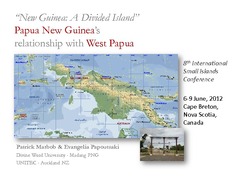 This paper gives an historical and current account of New Guinea, a Pacific Island divided between the independent state of Papua New Guinea and the Indonesian territory of West Papua and explores the ambiguous relationship between the two “brothers,” with a particular focus on media reporting. West Papua’s struggle for independence from Indonesia has gone largely unnoticed by the international media. It is sporadically covered by the neighbouring and regional media and this only in times of crisis such as refugees crossing borders, hostage taking and protests against the Freeport Mining Company that operates the world’s biggest gold deposit. There are currently 10,400 West Papuan refugees in PNG and although the country has shown solidarity to their “cultural brothers” in the past, current geopolitical tensions see Indonesia’s influence on PNG affecting that that solidarity. The paper is divided into two parts. The first part provides the island’s colonial history context and the role of the main colonial powers that led to the island’s division, along with the postcolonial and cold war legacies that sealed the fate of the island as a divided one. It also deals with the current geopolitical situation that involves the interests of Indonesia, PNG and Australia. In the second part the authors focus on the relationship between West Papua and PNG and how this is reflected particularly in the media. The decline in coverage of West Papua in the PNG press is worth exploring as it maps the decline of PNG’s engagement in the fate of their “cultural brothers” and neighbours (Matbob & Papoutsaki, 2006). They discuss a number of issues that have resulted from the islands division, including the issues of traditional cross-borders and the West Papua refugee camps/settlements in PNG. They also provide new evidence of increased cross border activities including trade and people flows that indicate the two parts of the island are communicating id different ways. The authors have interviewed a number of West Papua activists and Papua New Guinean journalists, conducted media content analysis of PNG newspapers and collected ethnographic data from the northern borders of PNG and West Papua.