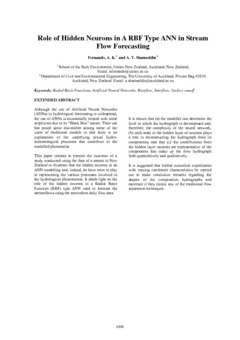 Although the use of Artificial Neural Networks (ANNs) in hydrological forecasting is widespread, the use of ANNs is occasionally treated with some scepticism due to its “Black Box” nature. Their use has posed some discomfort among some of the users of traditional models in that there is no explanation of the underlying actual hydrometeorological processes that contribute to the modelled phenomena. This paper intends to present the outcome of a study conducted using the data of a stream in New Zealand to illustrate that the hidden neurons in an ANN modelling tool, indeed, do have roles to play in representing the various processes involved in the hydrological phenomenon. It sheds light on the role of the hidden neurons in a Radial Basis Function (RBF) type ANN used to forecast the streamflows using the antecedent daily flow data. It is shown that (a) the modeller can determine the level to which the hydrograph is decomposed and, therefore, the complexity of the neural network, (b) each node in the hidden layer of neurons plays a role in reconstructing the hydrograph from its components, and that (c) the contributions from the hidden layer neurons are representative of the components that make up the flow hydrograph both quantitatively and qualitatively. It is suggested that further numerical experiments with varying catchment characteristics be carried out to make conclusive remarks regarding the shapes of the composition hydrographs and ascertain if they mimic any of the traditional flow separation techniques.