The effect of the raingauge distribution on stormwater models 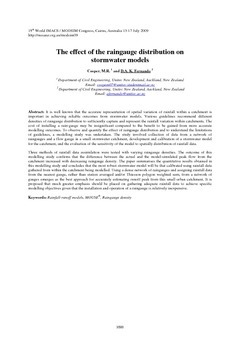 It is well known that the accurate representation of spatial variation of rainfall within a catchment is important in achieving reliable outcomes from stormwater models. Various guidelines recommend different densities of raingauge distribution to sufficiently capture and represent the rainfall variation within catchments. The cost of installing a rain-gauge may be insignificant compared to the benefit to be gained from more accurate modelling outcomes. To observe and quantify the effect of raingauge distribution and to understand the limitations of guidelines, a modelling study was undertaken. The study involved collection of data from a network of raingauges and a flow gauge in a small stormwater catchment, development and calibration of a stormwater model for the catchment, and the evaluation of the sensitivity of the model to spatially distribution of rainfall data. Three methods of rainfall data assimilation were tested with varying raingauge densities. The outcome of this modelling study confirms that the difference between the actual and the model-simulated peak flow from the catchment increased with decreasing raingauge density. The paper summarises the quantitative results obtained in this modelling study and concludes that the most robust stormwater model will be that calibrated using rainfall data gathered from within the catchment being modelled. Using a dense network of raingauges and assigning rainfall data from the nearest gauge, rather than station averaged and/or Thiesson polygon weighted sum, from a network of gauges emerges as the best approach for accurately estimating runoff peak from this small urban catchment. It is proposed that much greater emphasis should be placed on gathering adequate rainfall data to achieve specific modelling objectives given that the installation and operation of a raingauge is relatively inexpensive.

The Modelling and Simulation Society of Australia and New Zealand Inc. and the International Association for Mathematics and Computers in Simulation

Copyright © 2009 The Modelling and Simulation Society of Australia and New Zealand Inc. and the International Association for Mathematics and Computers in Simulation. All rights reserved.