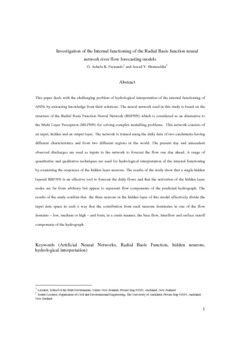 This paper deals with the challenging problem of hydrological interpretation of the internal functioning of ANNs by extracting knowledge from their solutions. The neural network used in this study is based on the structure of the Radial Basis Function Neural Network (RBFNN) which is considered as an alternative to the Multi Layer Perceptron (MLPNN) for solving complex modelling problems. This network consists of an input, hidden and an output layer. The network is trained using the daily data of two catchments having different characteristics and from two different regions in the world. The present day and antecedent observed discharges are used as inputs to the network to forecast the flow one day ahead. A range of quantitative and qualitative techniques are used for hydrological interpretation of the internal functioning by examining the responses of the hidden layer neurons. The results of the study show that a single hidden layered RBFNN is an effective tool to forecast the daily flows and that the activation of the hidden layer nodes are far from arbitrary but appear to represent flow components of the predicted hydrograph. The results of the study confirm that the three neurons in the hidden layer of this model effectively divide the input data space in such a way that the contribution from each neurone dominates in one of the flow domains – low, medium or high – and form, in a crude manner, the base flow, interflow and surface runoff components of the hydrograph.