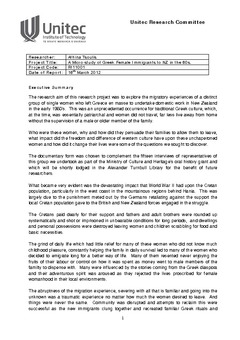 Tsoulis, A. (2012). A micro-study of Greek female immigrants to New Zealand in the 60s. [Unpublished Unitec Research Committee Research Report].

The research aim of this research project was to explore the migratory experiences of a distinct group of single women who left Greece en masse to undertake domestic work in New Zealand in the early 1960’s. This was an unprecedented occurrence for traditional Greek culture, which, at the time, was essentially patriarchal and women did not travel, far less live away from home without the supervision of a male or older member of the family. Who were these women, why and how did they persuade their families to allow them to leave, what impact did the freedom and difference of western culture have upon these unchaperoned women and how did it change their lives were some of the questions we sought to discover. The documentary form was chosen to complement the fifteen interviews of representatives of this group we undertook as part of the Ministry of Culture and Heritage’s oral history grant and which will be shortly lodged in the Alexander Turnbull Library for the benefit of future researchers. What became very evident was the devastating impact that World War II had upon the Cretan population, particularly in the west coast in the mountainous regions behind Hania. This was largely due to the punishment meted out by the Germans retaliating against the support the local Cretan population gave to the British and New Zealand forces engaged in the struggle. The Cretans paid dearly for their support and fathers and adult brothers were rounded up systematically and shot or imprisoned in unbearable conditions for long periods, and dwellings and personal possessions were destroyed leaving women and children scrabbling for food and basic necessities. The grind of daily life which had little relief for many of these women who did not know much childhood pleasure, constantly helping the family in daily survival led to many of the women who decided to emigrate long for a better way of life. Many of them resented never enjoying the fruits of their labour or control on how it was spent as money went to male members of the family to dispense with. Many were influenced by the stories coming from the Greek diaspora and their adventurous spirit was aroused as they rejected the lives proscribed for female womanhood in their local environments. The abruptness of the migration experience, severing with all that is familiar and going into the unknown was a traumatic experience no matter how much the women desired to leave. And things were never the same. Community was disrupted and attempts to reclaim this were successful as the new immigrants clung together and recreated familiar Greek rituals and celebrations but again were disrupted as the unsettled immigrants decided to move to Australia to be part of a greater Greek community or returned back home. Visits home highlighted the disruption for these women as villages were emptied, loved ones dead or gone, villages becoming ghost towns. We found that the Greek women we interviewed were reluctant to criticise their new host country and many spoke well of how they were treated by New Zealanders. Yet the toll the migration experience had upon them and their children is quite profound.