Turnaround leadership : how three successful leaders turned around their schools 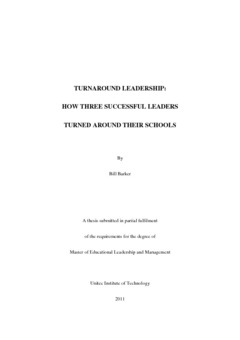 Barker, B. (2011). Turnaround leadership: How three successful leaders turned around their schools. A thesis submitted in partial fulfilment of the requirements for the degree of Master of Educational Leadership and Management, Unitec Institute of Technology, New Zealand.

RESEARCH QUESTIONS: What process of turnaround can be identified?  How do principals address decline and failure through turnaround?  What leadership characteristics are viewed as effective by principals and school leaders in the process of turnaround?  What theories do the principals hold about effective leadership in turnaround schools? The aim of this research was to identify the leadership characteristics that enable a principal to ‘beat the odds’ in turning around a declining school. No school is immune to the possibility of failure, more often found in already disadvantaged communities, as the cost to children and the wider community of such failure is high. Three primary schools were selected through purposive sampling as representing schools that had overcome a period of decline. Hawk’s predictors of decline (2008) and Education Review Office reports were used to confirm the eligibility of each school for this study. Multi-case study methodology was selected as appropriate for qualitative data collection and analysis. Data was collected using semi-structured interviews with three stakeholders (a staff and board member and the school principal) from each school. The findings indicated that failed schools followed a continuum from success through to declining to failure. Decline began because principals failed to recognise and address ever increasing problems. The most important internal intervention that was implemented in all three schools to move from failure and/or decline to improvement was ensuring that the right leadership was in place. Turnaround principals in this research could be differentiated by the combination of their focus, specific actions and by the complex environment in which they worked. They had no singular leadership style but demonstrated a capacity to make the right decision at the right time and therefore progressed through each critical phase of turnaround. Their job demanded resilience, expertise and unselfish dedication. These principals believed that all children can learn and succeed and that joint efforts increase the power of positive interactions and are necessary for success. Sadly, all three principals in this research spoke of an unwillingness to tackle turnaround again. Future reforms have much to learn from their achievements.