Local community knowledge, perceptions, and experiences of malaria prevention in the highlands of Papua New Guinea 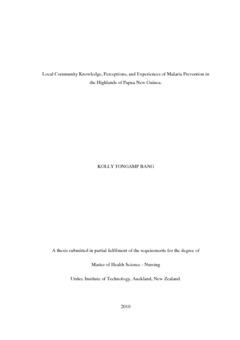 Bang, K. T. (2010). Local community knowledge, perceptions, and experiences of malaria prevention in the highlands of Papua New Guinea. A thesis submitted in partial fulfilment of the requirements for the degree of Master of Health Science - Nursing, Unitec Institute of Technology, New Zealand.

RESEARCH QUESTION: What are the experience and perceptions of malaria prevention and control by local Highlands people? BACKGROUND: Malaria is becoming common and causing seasonal epidemics in the Highlands of Papua New Guinea (Mueller et al., 2005). Malaria is mainly affecting the health of the local population who live in bush huts. The Highland’s local people’s knowledge, perception and practical measures to prevent malaria were explored in this study. OBJECTIVE: This study was aimed at identifying knowledge gaps and other possible environmental impediments that may influence effective participation of the local people. METHOD: Interpretive description (a qualitative approach) was used for this study. Data was collected through focus groups (x4) and individual interviews (x4). RESULTS: There were seven main themes that emerged from this study. Theme One revealed the locals’ knowledge gaps and misconceptions of malaria. Theme Two indicated climate change as a trigger for malaria increase in the Highlands. Theme Three revealed locals’ experiences of current malaria prevention and control strategies. Theme Four emerged as alternative malaria treatment. Theme Five revealed some problems faced by locals with the health care system. Theme Six showed locals’ perception of socio-economic disempowerment, and Theme Seven related to locals’ behavioural factors contributing to malaria. CONCLUSION: This study identified Highlands local knowledge gaps answering the original focus of study. The knowledge gaps indicated essential components for primary health care functions as needing attention, PHC workers in rural areas increased, and health planners to implement suitable approaches with local involvement to build locals’ knowledge capacity for malaria prevention and control.