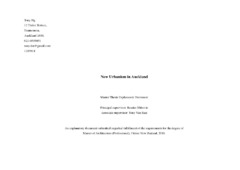 Ng, T. (2011). New Urbanism in Auckland. (Unpublished document submitted in partial fulfilment of the requirements for the degree of Master of Architecture (Professional)). Unitec Institute of Technology, Auckland, New Zealand. Retrieved from https://hdl.handle.net/10652/1838

This research project focuses on creating a transit-orientated pedestrian-friendly urban development to serve as a pedestrian linkage between the two different urban cultures of the Auckland CBD and Parnell. This project will investigate and propose an architectural solution to ease the urban problems derived from the current modernist planning approach adopted by Auckland planners. The site is situated at the intermediate land on the fringe of both Parnell and the city, on the reclaimed land of the former Mechanics Bay. The project aimed to improve the urban environment of both the site and its surrounding area by urban infill that would develop this under-developed site. Transit-orientated development (TOD) is a development designed to maximise access to public transport, with the transport station being the prominent feature of the centre of this development. It is a walkable development with the pedestrian as the highest priority, developed within the area of a 10-minute walk catchment circle surrounding the station. The transit-orientated development includes a detailed analysis of the site area with regard to its transportation functions and activities issues. It involves the detailed urban design and planning, and allocation of functions for the new buildings and public spaces developed at the completion of this project.