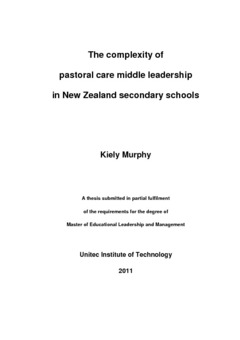 Murphy, K. (2011). The complexity of pastoral care middle leadership in New Zealand secondary schools. (Unpublished document submitted in partial fulfilment of the requirements for the degree of Master of Educational Leadership and Management). Unitec Institute of Technology, Auckland, New Zealand. Retrieved from https://hdl.handle.net/10652/1830