The solar familiar : fact and fiction in photography and visual anthropology 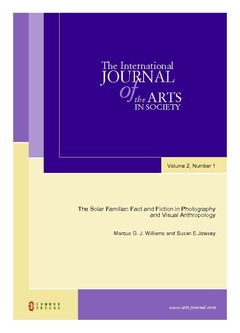 ‘Solar Familiar’ takes the form of a ‘documentary’ project, which investigates the psychological, and physical difficulties of a family displaced from Earth who find themselves inhabitants in the unfamiliar; a family on the extremes of an increasingly displaced population; both historically and culturally. This is a family alienated from the memorized ... rootless, they flounder to resurrect cultural experience, however, without cultural boundaries to define their world the gulf that separates them from their own personal histories and their shared history, has created in them an incomprehension they struggle relentlessly to overcome as if one sense has failed and the other four cannot attune to the loss. The artistic process is collaborative; parents and children from an actual family produce documentation and recreation of an imagined experience, constituting an ethnographic inventory, which in turn forms the basis of a documentary film. The interweaving of the documentary idiom, associated with objectivity and veracity, with fantasy and the conceived space of art raises questions about the mediated nature of the cultural construct; family.

All rights reserved. Apart from fair dealing for the purposes of study, research, criticism or review as permitted under the applicable copyright legislation, no part of this work may be reproduced by any process without written permission from the publisher. For permissions and other inquiries, please contact cg-support@commongroundpublishing.com.