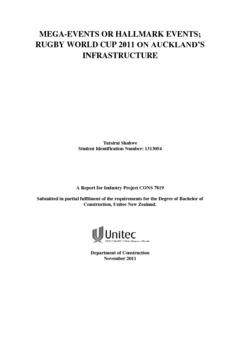 Shahwe, T. (2011). Mega-events or hallmark events: Rugby World Cup 2011 on Auckland’s infrastructure. (Unpublished document submitted in partial fulfilment of the requirements for the degree of Bachelor of Construction). Unitec Institute of Technology. Retrieved from https://hdl.handle.net/10652/1799

This research report looks at how Auckland has transformed itself in the lead up to the Rugby World Cup 2011 (RWC), and explored briefly the impacts and planning processes. Internationally, mega events have been used by cities to enhance their image and improve urban spaces. Cities have been recently viewed as commodities, so as a commodity they need to sell themselves. To do this often requires some change on the way it looks. As part of the research semi-structured interviews were conducted on seven purposefully selected participants who are key stake holders in the industry. This was considered to be a fair representation of the professions. The interviews established the perceptions of participants on the impact the RWC had on Auckland’s infrastructure, the types of projects that were affected and how they were affected, as well as how not having hosted the RWC would have affected development, how planning processes were affected and whether hosting events of that magnitude was a good idea. The research also briefly looked at the social and economic impacts. The research concluded that the hosting of the RWC did impact Auckland’s infrastructure as well as the planning processes of projects that were undertaken to facilitate the games. It also established that the RWC served as a catalyst for the urban development of Auckland as well as what would have happened if the RWC had not taken place. The RWC gave Auckland a much needed improvement on its image and the transport networks. The decision not to construct the waterfront stadium was considered a missed opportunity by all participants as they believed it could have been a catalyst for the development of better transport networks.