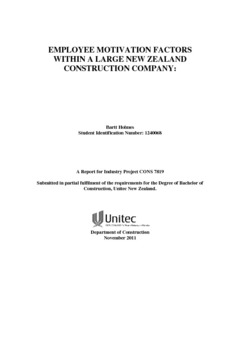 Holmes, B. (2011). Employee motivation factors within a large New Zealand construction company. (Unpublished document submitted in partial fulfilment of the requirements for the degree of Bachelor of Construction). Unitec Institute of Technology. Retrieved from https://hdl.handle.net/10652/1776

Despite the popularity of motivational research in the latter half of the twentieth century, little has been undertaken within the New Zealand construction industry and internationally little evidence exists on the motivation factors that influence different occupational groups within the industry. As construction remains one of the most people-reliant sectors, employee motivation is a crucial element needed to increase productivity. This research aimed to fill these knowledge gaps by exploring the motivation of employees working on New Zealand’s largest construction project. The research regarded the employees firstly as a single group, and the factors considered as influential motivationally, and also investigated whether specific occupational groups were motivated by differing motivating factors. The four occupational groups included in the research were Project Managers, Construction Supervisors, Quantity Surveyor and Contract Administrators. A questionnaire was administered to 39 employees. 33 responded and partook in structured interviews. The findings revealed that the respondents as a group were motivated by intrinsic rewards such as co-worker relationships and completing challenging tasks which are highly rated on Maslow’s Hierarchy of Needs. It was also found that Project Managers had a marked desire for intrinsic rewards compared to the three other occupational groups. Quantity Surveyors and Construction supervisors provided mixed responses, however they still identified intrinsic rewards as their most significant motivating factors. Contract Administrators were found to have a stronger desire for extrinsic rewards such as monetary rewards and job security. It was concluded that the employees of a large New Zealand construction company were primarily motivated by intrinsic rewards, and employers should perhaps base their employee motivation strategies around these preferred motivators. On a more detailed level, different motivating factors were favoured by each individual occupational group, and this should also be taken into account to improve motivation and overall productivity.