Growth and diversification of mass media in India: Whose interests, whose ideas? 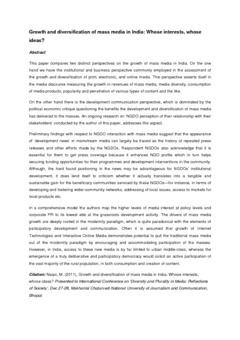 Naqvi, M. (2011, December). Growth and diversification of mass media in India: Whose interests, whose ideas? Paper presented at the International Conference on Diversity & Plurality in Media - Reflections of Society, Bhopal, India.

This paper compares two distinct perspectives on the growth of mass media in India. On the one hand we have the institutional and business perspective commonly employed in the assessment of the growth and diversification of print, electronic, and online media. This perspective asserts itself in the media discourse measuring the growth in revenues of mass media, media diversity, consumption of media products, popularity and penetration of various types of content and the like. On the other hand there is the development communication perspective, which is dominated by the political economic critique questioning the benefits the development and diversification of mass media has delivered to the masses. An ongoing research on ‘NGDO perception of their relationship with their stakeholders’ conducted by the author of this paper, addresses this aspect. Preliminary findings with respect to NGDO interaction with mass media suggest that the appearance of ‘development news’ in mainstream media can largely be traced as the history of repeated press releases and other efforts made by the NGDOs. Respondent NGDOs also acknowledge that it is essential for them to get press coverage because it enhances NGO profile which in turn helps securing funding opportunities for their programmes and development interventions in the community. Although, the hard found positioning in the news may be advantageous for NGDOs’ institutional development, it does lend itself to criticism whether it actually translates into a tangible and sustainable gain for the beneficiary communities serviced by these NGDOs—for instance, in terms of developing and fostering wider-community networks, addressing of local issues, access to markets for local products etc. In a comprehensive model the authors map the higher levels of media interest at policy levels and corporate PR to its lowest ebb at the grassroots development activity. The drivers of mass media growth are deeply rooted in the modernity paradigm, which is quite paradoxical with the elements of participatory development and communication. Often it is assumed that growth of Internet Technologies and Interactive Online Media demonstrates potential to pull the traditional mass media out of the modernity paradigm by encouraging and accommodating participation of the masses. However, in India, access to these new media is by far limited to urban middle-class, whereas the emergence of a truly deliberative and participatory democracy would solicit an active participation of the vast majority of the rural population, in both consumption and creation of content.