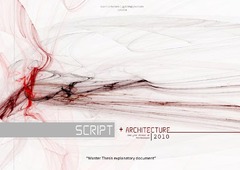 The objective of this Master’s thesis is to investigate the use of computer algorithms to aid the pre-conceptual stage in architectural design. The concept juggles the real world and the world of virtual design. I will be investigating various possibilities of algorithmic modelling and the impact of doing so. My intention is to investigate the possibilities of the pre-conceptual computer algorithm as a tool, I first focus on a key study of relationships within the spatial assembly of performing arts centres (PACs). This is achieved through a case study analysis of PACs, in order to understand the parameters, which are then applied to my site (the Unitec performance theatre). By use of computer modelling tools an ‘ideal’ layout for spaces will be determined for the design of the Unitec theatre. Three real-world performance art centres were investigated: The Auckland Performing Arts Centre (T.A.P.A.C), Maidment Theatre - Te Atamira, and Bruce Mason Centre. After critically evaluating how the spaces were arranged within those buildings I propose some commonality between those three centres. This forms the “essence” of the programming script that is later created. As a control for the effectiveness of the script, I used real world T.A.P.A.C data and collected the results produced by the script. This way, I can judge whether the script model I created is valid. Having successfully confirmed the results to be similar for both the real-world and virtual T.A.P.A.C, the written script can be accepted as a valid tool. I therefore used the tools in my proposed design project for the Unitec theatre. The results offered a number of different possibilities. These possibilities provided a wide range of unexpected arrangements. It was then necessary to judge and critically filter the results. This experiment has been proven to work as each space has its own hierarchy in relation to its individual site. Computer programming also proved to be very fast and flexible to moderate the model as a pattern of data. Possibilities of widening the vision of an architect by providing a number of valid solutions which may later be used as a design template during the architect’s pre-conceptual stage have also been found to be useful. This project shows how to not only successfully investigate the possibilities for the use of aided computer’s algorithm in architecture design, but also proposes a new parallel line of design process from which architects can benefit. This is a promising field within the architecture-digital research topic, as it suggests how the developed models may be further enriched and states the current limitations to the script, which could be developed further.