How do we sustain regional architecture in the face of modern models of universal internationalist architecture? 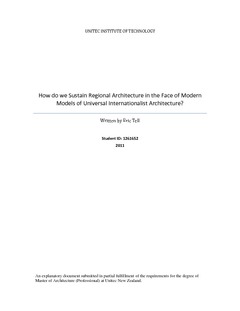 Tell, E. (2011). How do we sustain regional architecture in the face of modern models of universal internationalist architecture? (Unpublished document submitted in partial fulfilment of the requirements for the degree of Master of Architecture (Professional)). Unitec Institute of Technology, Auckland, New Zealand. Retrieved from https://hdl.handle.net/10652/1753

In the course of twentieth century architecture, like most aspects of culture we have seen an increasing homogeneity between regions. In our present world that has come to accept this concept of ‘blandification’, it is often difficult to tell by architecture alone where a piece of international style architecture might be sited on the earth. This highlights the problem of local stylistic sources of innovation being lost, as universal styles of architecture, art, food, etc., of internationalist culture take over. This creates a tension and sometimes an outright conflict between those who welcome a human universal architecture of modernity and those who deplore it, seeing it as a threat to indigenous cultures, traditions, and to regional architectural character in particular. We love to visit unique cities such as St Petersburg, Paris, Rome, Venice, Bangkok, or wander through towns and villages in Greece, Spain, Italy, Mexico, and Japan. Part of the appeal of all these places is their architecture. They have an uniqueness about them, they are distinct, recognizable, generated by their site, location, climate, and locally sourced materials and construction techniques. Most of the population inhabiting these built environments as well as the people visiting them strive to safeguard their established architecture, culture, and system of settings. They are often integrated systems in which people act, behave and live.(1) It is important for people to value their historic continuity, cultural diversity and preserve their identity in combination with their geography. Here in New Zealand and for that matter, most countries, whenever someone proposes to design/construct something new or modify an existing building, in particular historic buildings, a debate arises and inevitably the same question and issues get brought to our attention. Will the new building fit within its surroundings, contributing positively to the existing townscape/landscape? Will the aesthetics of the building fit its surroundings? For New Zealand the issue may lie in keeping the right balance between using modern internationalist inspired architectural models and preservation of the, or adaptation of the old. Regionalist Architecture is Explored through the design of a fishing lodge in the Bay of Islands in New Zealand. 1. Nicholas Markovich, Wolfgang Preiser, and Fred Strum. Pueblo Style and Regional Architecture. (New York: Van Nostrand Reinhold, 1992), 272.