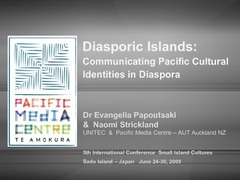 This paper examines diasporic identities within the Pacific islands context and how these identities are communicated through different forms of diasporic media. Islands tend to be diasporic in nature and islanders shape their identities often in movement. Movements within island groups and the greater Pacific ocean, both by islanders themselves and outsiders, have enabled these islands to create complex identities that have expanded beyond their natural boundaries and into well established diasporic communities that have stimulated multifaceted and multi-trafficking communication practices within the diasporic communities themselves; between diasporic communities across the world; and between these communities and their island homes. These communication processes illustrate how these island identities are formed and/or sustained in diaspora and what impact these processes have on these identities. South Pacific island diasporas are found in NZ, Australia and the US. They have formed lively communities with distinctively diverse identities and established channels of communication, formal and informal, traditional and virtual, from the ‘coconut wireless’ to church newsletters and radio stations. This paper examines how these diasporic island communities communicate their identities through these media and how the latter contribute to the sustenance and (re) construction of cultural identities away from home. This paper is mostly based on data collected during the pilot phase of a Pacific Diaspora media project conducted in Auckland, New Zealand in 2008. The project sought to identity the available diasporic media and map its primary functions. The authors are now looking at the emerging theme of media and diasporic island cultural identities. There are increasing references to Pacific Islands communities living abroad as Pacific diasporas (i.e. Howard, 1999; Morton, 1998; Gershon, 2007; Spoonley, 2001). Spickard et al (2002) in Pacific Diaspora: Island Peoples in the United States and Across the Pacific , explore the ‘transnational or diasporic model’in examining the Pacific communities living abroad, which emphasises continuing links with their people at home or elsewhere abroad. They also explore the ‘pan-ethnicity model’ which is more pronounced among second and third generation Pacific Island migrants who are increasingly seeing themselves as Pasifika people with a new hybrid inclusive identity. The current debate is whether we now have new ethnic identities which focus on shared Polynesian descent, pan-polynesian or ‘nessian’ identities e.g. ‘New Zealand borns’, ‘P.I.’s’, ‘Polys’, or pasifikans. Also, the gradual replacement of the term Pacific Islanders with the terms Pacific people in both official and popular discourse is an acknowledgment of the fact that most Pacific descent people are no longer from the traditional island homelands, and that their commonalities derive from culture rather than place of birth. Pacific diasporic media in New Zealand has been shaped and diversified along these lines, catering as the paper demonstrates for a diverse diasporic audience.