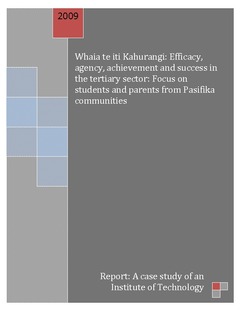 The present study is situated in Unitec Institute of Technology, a dynamic tertiary institution in New Zealand, catering to the needs of a large and diverse student population enrolled in courses ranging from certificate level to doctoral programmes. Annual summative evaluations of achievement of students reveal ethnicity based disparities in the rate of success and retention of undergraduate students, with Pasifika students positioned in the lower levels as compared to mainstream and Maori students in both Unitec campuses. In this research project, the reasons underpinning this disparity is assessed from the context of efficacy and agency of students, two constructs which correlate with academic achievement. Led by a research design underpinned by Kaupapa Maori, Pasifika, mainstream methodologies, and ancient philosophies, the findings are reported mainly from the perspectives of student and parent participants from Pasifika communities. Although an inclusive approach of inviting tertiary students across all ethnicities that had enrolled for a qualification programme to participate was the norm, the central aim was to unravel some of the challenges faced by participants from the Pasifika community which precluded optimal achievement. Unitec Centre for Pacific approved Tertiary Education Commission funding for this research. Pasifika parents with teenagers enrolled in secondary schools or/ and with children in the tertiary sector were also invited to participate in focus groups to share their perspectives on higher education, and how they coped with emerging challenges. A mixed-methods approach was used to assess self-efficacy, agency, and perceptions of success. Findings reveal students in the tertiary sector reporting high levels of efficacy. Agency and perception of success seems to be more collective in nature, with a sense of responsibility towards oneself and one’s family acting as agentic forces to succeed in the tertiary sector. Students are intent upon setting goals, using learning strategies, taking responsibility for their learning and attaining them. Teacher participation in this research was almost non-existent, despite being part of the research design. This was a major limitation of the study, since there is no empirical data on culturally sensitive teaching strategies in use. The findings also capture the critical role of family, teachers, support staff, and peers in student achievement and success in bicultural and multi-cultural tertiary education context.