Dictating participation: What choice do the targets of empowerment have? 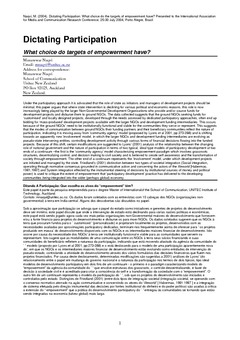 Naqvi, M. (2004, July). Dictating participation: What choice do the targets of empowerment have? Paper presented at the Conference of the International Association for Media and Communication Research, Porto Alegre, Brazil.

Under the participatory approach it is advocated that the role of state as initiators and managers of development projects should be minimal, this paper argues that where state intervention is declining for various political and economic reasons, this role is now increasingly being played by the larger Non-Governmental Development Organisations who provide and/or source funds for development projects and disburse them to ground NGOs. The data collected suggests that the ground NGOs seeking funds for ‘customised’ and locally designed projects, developed through the needs assessed by dedicated participatory approaches, often end up bidding for ‘mass-produced’ development projects available with the larger NGOs and development funding intermediaries. This occurs because of the ground NGOs’ need to be institutionally functional and viable for the communities they serve or represent. This suggests that the modes of communication between ground NGOs their funding partners and their beneficiary communities reflect the nature of participation, indicating it is moving away from ‘community agency’ model (proposed by Lyons et al 2001, pp 273-288) and is shifting towards an apparently new ‘involvement’ model, in which the larger NGOs and development funding intermediaries are evolving as pseudo-state intervening entities, controlling development activity through various forms of financial decisions flowing into the funded projects. Because of this shift, certain modifications are suggested to Lyons’ (2001) analysis of the relationship between the changing role of national government and the nature of participation in terms of two typical, ideal type models of participatory development at two ends of a continuum – the first is the ‘community agency’ model characterizing empowerment paradigm which involves grassroots structures, decentralizing control, and decision making to civil society and is believed to create self awareness and the transformation of society through empowerment. The other end of a continuum represents the ‘involvement’ model, under which development projects are initiated and managed by the state. Friedland’s (2001) distinction between two types of societal integration (Social integration, operating through normative consensus grounded in communicative action and concerning the actors of the lifeworld [Habermas, 1981,1987] and System integration effected by the instrumental steering of decisions by institutional sources of money and political power) is used to critique the extent of empowerment that ‘participatory development’ practice has delivered to the developing communities being integrated into the wider (perhaps global) economy.