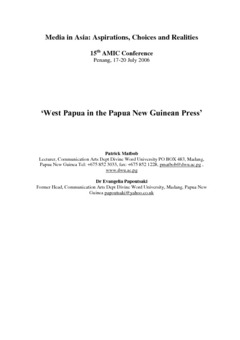 “The media in their privileged position as the makers and shapers of public opinion have a responsibility to ensure fair and balanced coverage in the context of crisis situations in the pacific – for refugees in Nauru and Manus Island, those on the borders of PNG and West Papua, IDPs in Fiji and the Solomon Islands” (Action, 2002:1). West Papua’s struggle for independence from Indonesia has gone largely unnoticed by the international media. It is sporadically covered by the neighbouring and regional media and this only in times of crisis such as refugees crossing borders, hostage taking and protests against the Freeport Mining Company that operates the world’s biggest gold deposit. Much of the coverage reflects geopolitical complexities involving Indonesia’s growing political influence in the region that discourages neighbours and the international community from taking a position on what is considered a national matter and out of fear of destabilising the country and the region. This paper explores the West Papua issue through the Papua New Guinea media. Much of the coverage in the past came during the height of clashes between Indonesian and Free Papua Movement forces usually along the border of West Papua and PNG and in times of refugees crossing the borders. However, there has been a great shift in coverage over the last 20 years indicating a decline in stories on West Papua and a general lack of interest from PNG media to invest time and effort for proper coverage. Comparing to earlier coverage and taking also into consideration that PNG is the only neighbouring country that shares not only land borders but also a Melanesian heritage and several thousand West Papuan refugees, the decline in media coverage is not easily justified. This research is seeking to identify the reasons for this decline. The assumption is that this is due to regional geopolitics (PNG’s increasingly closer relationship with Indonesia and Australia’s influence on PNG regional politics) and a general decline in journalism practices in the PNG media. A comparative content analysis of three PNG newspapers at two different time frames was carried out in order to study the change in press coverage. In addition, in depth interviews with journalists involved in the reporting of West Papuan were also taken in order to help us better understand the media’s role in covering West Papua. Interviews with West Papuan individuals present in PNG were also done to understand better the conflict and their perceptions of how they are represented in the PNG media.