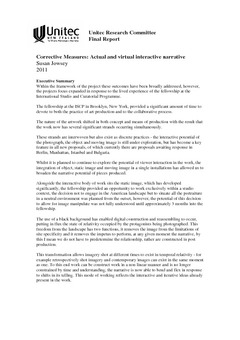 Within the framework of the project these outcomes have been broadly addressed, however, the projects focus expanded in response to the lived experience of the fellowship at the International Studio and Curatorial Programme. The fellowship at the ISCP in Brooklyn, New York, provided a significant amount of time to devote to both the practice of art production and to the collaborative process. The nature of the artwork shifted in both concept and means of production with the result that the work now has several significant strands occurring simultaneously. These strands are interwoven but also exist as discrete practices - the interactive potential of the photograph, the object and moving image is still under exploration, but has become a key feature in all new proposals, of which currently there are proposals awaiting response in Berlin, Manhattan, Istanbul and Bulgaria. Whilst it is planned to continue to explore the potential of viewer interaction in the work, the integration of object, static image and moving image in a single installations has allowed us to broaden the narrative potential of pieces produced. Alongside the interactive body of work sits the static image, which has developed significantly, the fellowship provided an opportunity to work exclusively within a studio context, the decision not to engage in the American landscape but to situate all the portraiture in a neutral environment was planned from the outset, however, the potential of this decision to allow for image manipulate was not fully understood until approximately 3 months into the fellowship. The use of a black background has enabled digital construction and reassembling to occur, putting in flux the state of relativity occupied by the protagonists being photographed. This freedom from the landscape has two functions, it removes the image from the limitations of site specificity and it removes the impetus to perform, at any given moment the narrative, by this I mean we do not have to predetermine the relationship, rather are constructed in post production. This transformation allows imagery shot at different times to exist in temporal relativity - for example retrospectively shot imagery and contemporary images can exist in the same moment as one. To this end work can be construct work in a non linear manner and is no longer constrained by time and understanding, the narrative is now able to bend and flex in response to shifts in its telling. This mode of working reflects the interactive and iterative ideas already present in the work. The third element that has occurred is also interactive in yet another sense. It involves the addition of elements directly onto or into the surface of the photograph by ripping and stitching the surface of the image. Here found imagery, drawing, old photographs, materials such as wool, clothing, plaster, have been used to disrupt the surface of the portrait. Altering the narrative potential of the image and transforming it into a haptic experience. Each of these developments can be attributed directly to the period of sustained practice able to be achieved by the six month fellowship at the ISCP. Highlights of this time were the Open Days Event at the ISCP which is a four day event with a large Opening to which dignitaries from many different countries are invited. [There are 30 artists at the ISCP at any one time who are drawn from all over the world: Europe, America, Asia and Australia and New Zealand] The Open Days achieved for the first time last year, a listing in the New York Times, What’s On. Around 2000 people attend the open days making it an important time for meeting people and discussing the work. A widely circulated broadsheet is produced with photographs of artists work and a small statement to coincide with this event. Other highlights were being selected for an International peer reviewed Photography Exhibition to be held in Chelsea Manhattan, at the Joy Wai Gallery in the Spring of this year. A full colour A4 sized catalogue has been produced to accompany this exhibition. Work produced at the ISCP was also selected in a juried exhibition in Chicago at the ARC Gallery. [School of the art institute of Chicago] This exhibition was held in February 2011. A major quality assured exhibition showcasing the work produced during the ISCP fellowship will open at the Galleries of Contemporary Art run by the University of Colorado, Colorado Springs on the 29th of April 2011. My co-researcher Assoc. Prof Marcus Williams and myself were invited to give talks to the students at the Tisch School New York, Georgia State University and Rochester Institute of Technology, Parsons New School New York. We were interviewed by William Pym, Asia Art Pacific Magazines managing editor, for a new web based project the magazine is working on based on artists working abroad for a period of time. To be launched 2011. We participated in a number of artists projects at the ISCP, one of the key features of an international fellowship is the ability to meet and work with artist from all over the world and to maintain a relationship and network with these people. In conclusion the time spent on this fellowship was important in furthering the development of a framework for both the narrative and the integration of multi media into the working process of F4. Further to this I have been accepted to present a paper of at the 6th International Conference on the Arts in Society in May 2011 at the Brandenburg Academy of Sciences and Humanities, Berlin, Germany. I have just received notification of selection for the Kaunas Biennial in Lithuania, an International juried art biennial to be held in September 2011.