Prevalence of internal parasites of Oligosoma infrapunctatum on Mokoia Island 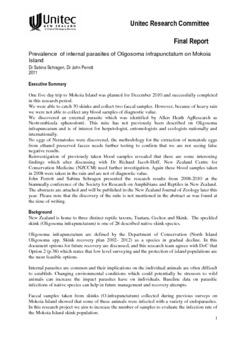 One five day trip to Mokoia Island was planned for December 2010 and successfully completed in this research period. We were able to catch 30 skinks and collect two faecal samples. However, because of heavy rain we were not able to collect any blood samples of diagnostic value. We discovered an external parasite which was identified by Allen Heath AgResearch as Neotrombicula sphenodonti . This mite has not previously been described on Oligosoma infrapuncatum and is of interest for herpetologist, entomologists and ecologists nationally and internationally. No eggs of Nematodes were discovered, the methodology for the extraction of nematode eggs from ethanol preserved faeces needs further testing to confirm that we are not seeing false negative results. Reinvestigation of previously taken blood samples revealed that there are some interesting findings which after discussing with Dr Richard Jacob-Hoff, New Zealand Centre for Conservation Medicine (NZCCM) need further investigation. Again these blood samples taken in 2008 were taken in the rain and are not of diagnostic value. John Perrott and Sabina Schragen presented the research results from 2008-2010 at the biannually conference of the Society for Research on Amphibians and Reptiles in New Zealand. The abstracts are attached and will be published in the New Zealand Journal of Zoology later this year. Please note that the discovery of the mite is not mentioned in the abstract as was found at the time of writing.